How Many Ounces Is A Cup

As earlier stated, a cup is not a standard unit of measurement anywhere, although it’s quite popular. That is because there are different types of cups with different sizes and capacity. In my opinion, the differences in how much a cup contains follows after the fact that cups generally do not come in the same size, or shape or color. I could use a teacup and you could use a mug, while someone else uses a coffee cup. That does not change the fact that all of them are cups and have their individual capacities. The difference in these cups is how much they can contain. Keep in mind that if you’re brewing a 6Oz cup of coffee, you will need something at least 1 Oz larger for space to avoid spillage. In America, a cup is typically 8 fl.Oz which is equivalent to about 236 milliliters in metric system. In Canada, a cup is 227 milliliters which is equal to 7.6 ounces, and in Japan a cup is 200 milliliters which is just 6.7ounces. All of these quantities are valid and these variations still measure as a cup where they are used. I would say how much ounces are in a cup are dependent on location.

How Many Ounces Does A Cup Of Coffee Maker Contain

Having considered the variations in a cup generally, then you know that a cup of coffee maker will also have variations too, but the good thing is, unlike in general terms, a cup of coffee maker is always around 6Oz, and that is what the coffee maker measures as a cup, even though no one drinks coffee that small. Some coffee makers have a larger measurement while some have smaller measurements. It all depends on the brand. Another good thing is, for flexibility when it comes to the measurements, some coffee makers make it easy by offering different cup sizes which you can choose from. Some will let you choose between using a 6 Oz, 8 Oz or 10 Oz cup as your cup of coffee which I think is great. Because either one of the cups you use, you will still have something great and satisfactory. The only issue is how to measure out the water based on the coffee maker’s cup size, that is why it is advised that you fill your water reservoir all the way up when you’re about to brew. To know the particular size of cup your coffee maker uses, you can check your coffee maker specifications in the user manual, or check the calibration on the water reservoir. It will be easier when you know how many ounces to expect in a cup.

How Do I Know How Much Water To Use

Because of the variation in the cup measurement, it is advised that you measure out the amount of water that you want to use, using a kitchen scale. This will offer you an accurate measurement compared to the cup. When you can measure out the water properly, you most likely will be able to add the appropriate amount of coffee. When buying a scale, make sure you buy the one that offers you a tenth of a scale for better accuracy. If your scale is not accurate then that’s another issue entirely.

How Much Coffee Per Cup

It is recommended by SCAA that the golden rule of coffee brewing is to use one part coffee to sixteen parts water, which has been proven to produce great results. Of course, coffee is a personal experience, and how much coffee you use to brew your coffee largely depend on how you like your coffee to be. If you like it bold, you obviously will use more coffee than someone who likes it light. In all, you can use one to two tablespoons for each 6oz cup of coffee, which is equivalent to about 8.5grams of coffee. It is also very okay to explore. You can try out different ratios to discover which of them you will like the most. The ratio of coffee to water is between 1:12 to 1:18, which you can still deviate from if you want to. Either way, just make sure you make something you will enjoy.

How you make your coffee and how much coffee you use for a particular amount of water depends on you and how you love your coffee. Since you already know how many ounces of water your coffee maker measures as a cup, or at least you know how to check, then you can be sure that you will do just great with the measurements. If you’re still new to coffee making then it might be a great idea to follow SCAA recommendation for how much coffee to use. When you become a pro at making coffee, then you will be able to tweak your coffee however you want it irrespective of how many ounces your coffee maker measures as a cup. 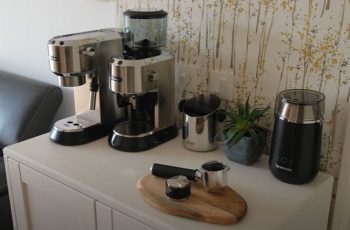